Thermal injury triggers a fulminant inflammatory cascade that heralds shock, end-organ failure, and ultimately sepsis and death. Emerging evidence points to a critical role for the innate immune system, and several studies had documented concurrent impairment in neutrophil chemotaxis with these post-burn inflammatory changes. While a few studies suggest that a link between neutrophil motility and patient mortality might exist, so far, cumbersome assays have prohibited exploration of the prognostic and diagnostic significance of chemotaxis after burn injury. To address this need, we are developing microfluidic devices that are simple to operate and allow for precise and robust measurements of chemotaxis speed and persistence characteristics at single-cell resolution. Using one such assay, we have already established a reference set of migration speed values for neutrophils from healthy subjects. Comparisons with samples from burn patients revealed impaired directional migration speed starting as early as 24 hours after burn injury, reaching a minimum at 72–120 hours, correlated to the size of the burn injury and potentially serving as an early indicator for concurrent infections.

Progressive microglial accumulation at amyloid-β (Aβ) plaques is a well-established signature of the pathology of Alzheimer's disease, but how and why microglia accumulate in the vicinity of Aβ plaques is unknown. To understand the distinct roles of Aβ on microglial accumulation, we are designinf microfluidic devices to quantify microglial responses to week-long lasting gradients of soluble Aβ and patterns of surface-bound Aβ in microfluidic chemotaxis platforms. Recntly, we found that human microglia chemotaxis in gradients of soluble Aβ42 could be enhanced by Aβ-induced microglial production of MCP-1. Microglial migration was inhibited by surface-bound Aβ42 in oligomers and fibrils above 45 pg.mm−2. Better understanding of microglial migration can provide insights into the pathophysiology of senile plaques in AD.

T cells play an important role in the immune response. They originate in bone marrow and develop in the thymus before entering the bloodstream. The migration of these cells from bone marrow to thymus to bloodstream is believed to be driven by chemorepulsion. We have developed a device to study chemorepulsion in T cells. Here we show T cells seeded into a central channel with branches leading to either side. The right branch ends in media containing a chemorepellent, while the left branch ends in media alone. T cells migrate persistently through the left branch, but typically reverse direction or fail to enter into the right branch. This work has applications in tissue rejection countermeasures and in immune-related diseases. 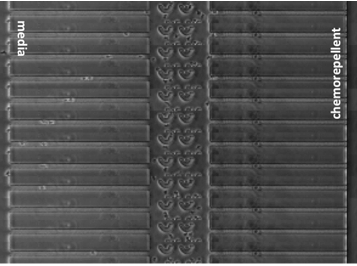 Neutrophils, the white blood cells that protect us from harmful microbes, have some remarkable capabilities. Despite being less than 10 microns in diameter, neutrophils can be very smart about the direction in which they move. For example, more than 90% of the human neutrophils are able to pick up the shorter of two routes towards a chemical stimulus. Here you can see how "smart" neutrophils are at asymmetric and symmetric bifurcations. The ability of neutrophils to orient is lost in patients with severe burn injuries, contributing to the higher rates of infections in these patients.

The ability of cells to migrate and orient could also be a problem. When it happens in cancer cells, it enables these cells to migrate away from the primary tumor and form metastases, which are ultimately responsible for 90% of deaths in cancer patients. We were very surprised to find that cancer cells are able to find the shortest path to exit microscopic mazes, even in the absence of any externally imposed gradients. Here you can see for yourself how cancer cells navigate through a maze . Our evidence provides support for a novel self-guidance mechanism that epithelial cells can employ when confined in small spaces.

We have also known for some time that cancer cells can move several times their body length every hour. To put things into perspective, it would take less than one month for a breast cancer cell moving through the lymphatic vessels, to travel from a tumor in the breast to a local lymph node. Here you can watch some breast cancer cells "speeding" through small channels at 200 µm/hour .

Taken together, our observations are not just fascinating examples of biological sophistication. They could also open exciting opportunities for probing into disease processes in novel ways. And, one day, lead to new approaches to treating acute infections, resolving chronic inflammation, and stopping the progression of cancers... 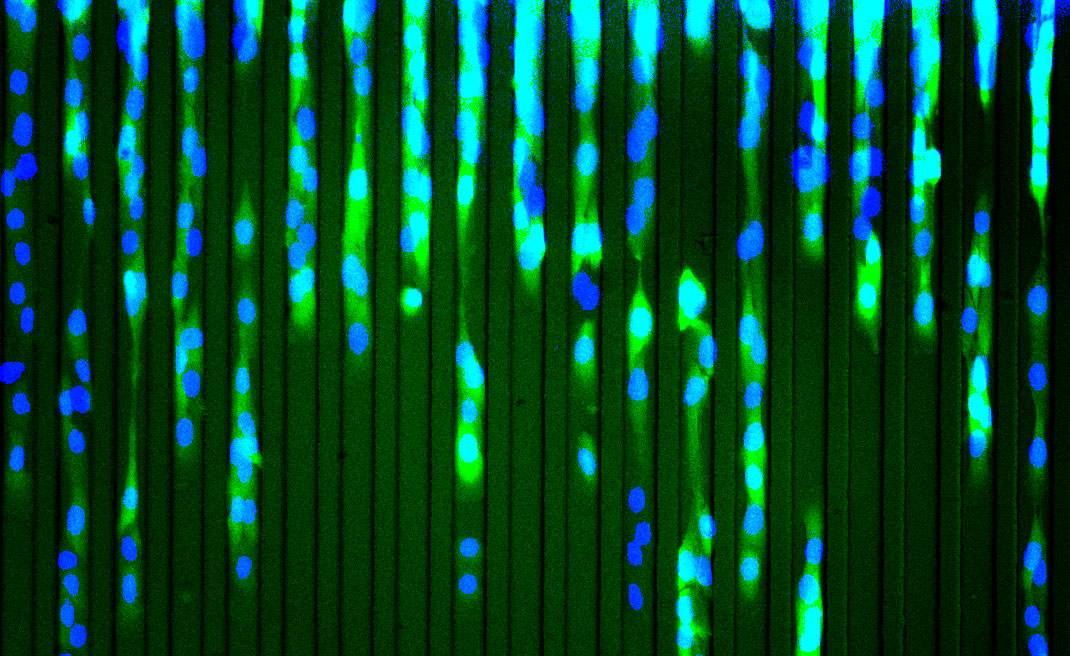 This image shows a new experimental platform for characterizing how cancer cells migrate individually and collectively in microfabricated 3D architectures. This approach will yield new insights into how malignant cancer cells invade and aid in the evaluation of new antimetastatic therapies.
Smolen et al. Genes & Dev. 2010. 24

Metastasis contributes to 90% of cancer deaths. Migration and invasion processes play an important role in this underlying metastatic cascade. Tumors are composed of heterogeneous cells with varying phenotypes and metastatic potential. The ability to observe, quantify and understand the ability of individual cells to migrate and invade has important implications in understanding both disease progression and therapeutic development. Specifically engineered microenvironments consisting of both mechanical and chemical guidance cues are important technological platforms for furthering the understanding of underlying phenotypic difference in tumor cell populations. Moreover, using high-resolution microscopy to study internal architectures of migrating cells has important implications in understanding the fundamental processes that fuel migration. By studying single cells we can begin to quantify migration phenotypes and begin to identify cells that possess greater metastatic potential then others.

Chemotaxis of neutrophils and monocytes

We developed a functional assay for measuring the levels of elastase produced in real time by monocytes accumulating in nanoliter chambers. Elastase, a serine protease that hydrolyses amides and esters, is an enzyme up-regulated following phlogistic activation of monocytes. In this movie, monocytes (red) migrate to LTB4 (100 nM), which stimulates elastase activity. A fluorescent signal is produced upon substrate cleavage by the elastase enzyme produced by the cells.

To measure the effects of the interactions between neutrophils and monocytes migrating in response to various chemoattractants, at single-cell resolution, we developed a microfluidic platform that replicates critical features of focal inflammation sites. We integrated an elastase assay into the focal chemotactic chambers of our device that enabled us to distinguish between phlogistic and nonphlogistic cell recruitment.

A neutrophil enters a channel and migrates up a gradient of chemoattractant (shown in red). When the cell reaches the top of the channel, it continues to migrate, even though the chemoattractant concentration is decreasing. This result shows the importance of mechanical guidance in driving neutrophil chemotaxis to and from site of inflammation.

The platform is designed to generate competing chemotactic gradients and compare the effects of these gradients on cellular motility through migration channels. 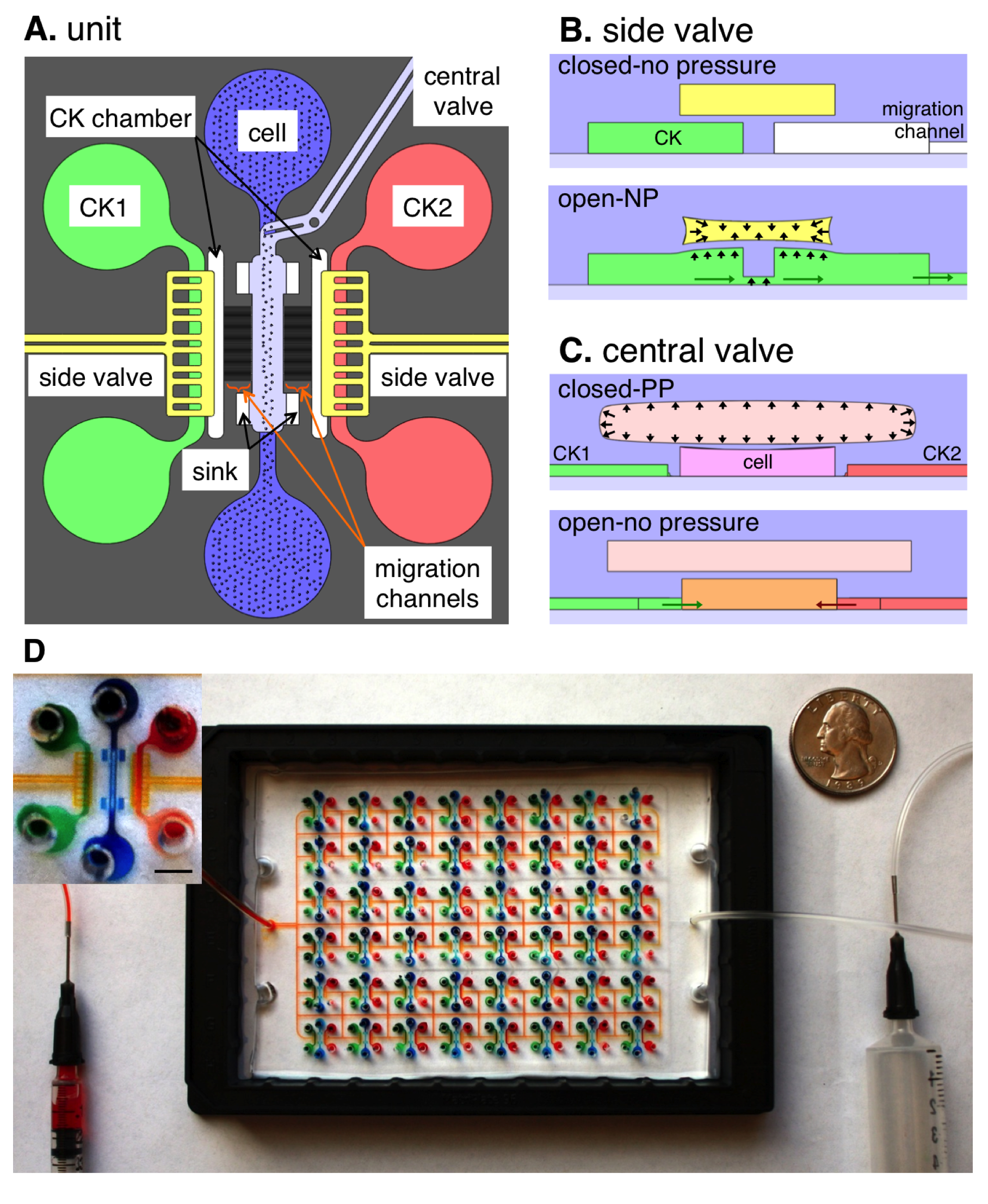